Play the name game with Nametrix 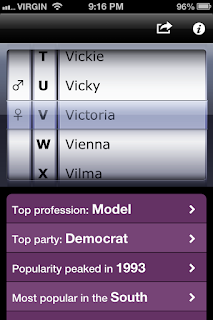 When I was young and had no intention of having children, I decided that in the unlikely event I did have a daughter, her name was going to be Victoria. I made all of my friends swear they wouldn't use my name. Ummmm, M is not named Victoria. When the time came and I was trying it out talking to the wriggly little baby in my belly, I just wasn't feeling it. I had open abdominal surgery during pregnancy and needed her to be strong to get both of us through the ordeal, so I named her after the most ferocious woman I knew - my grandmother. It just... fits. Luckily a quick analysis of her name shows she's likely to be employed in the arts and a liberal. She'll fit in here just fine.

HOW did I analyze her name? With Nametrix, an app that has analyzed the names of millions of real people and their professions to tell you what people with that name do for a living and how they vote, statistically speaking. Naming your kid is hard. Their name on a resume or online dating profile could be grounds for immediate dismissal one day. Finding out too late the name you picked has girls working the pole in disproportionate numbers is just not cool. OK, so you probably shouldn't base an important decision like your child's name on some fun facts from an app, but it's still a cool way to pass some time.

The Husband will be pleased to learn that the leading contender for P2's name is shared by a good number of computer scientists, engineers and mathematicians. Who are also liberal. It's like we'll each have a kid of our own!

This is not sponsored content. I received no compensation for this post, I just think Nametrix is cool.
at 9:21 PM