A couple of years ago, our blender died, and thus I embarked on a journey more complicated than I ever imagined. Did you know the price range for blenders varies from around $40 to above and beyond $1,000 for the highest of the high end?

While we generally never regret investing in high-quality appliances, we decided that buying the most expensive one on the market would be overkill to crush ice for occasional margaritas. Eventually, The Husband and I settled for a bare-bones one that does most of the things we need it to... adequately. There are still big chunks of frozen fruit in smoothies, for example, but to avoid a big cash outlay, we were prepared to live with it.

BUT! When I was given the chance to try the Eufy MiracleBlend, I jumped at it. First, I tried to make a rose slushie because it was a stinkin' hot day, and those are better with wine - AMIRITE?

However, I have the self-discipline of a toddler, so I winged it and threw a handful of ice cubes in with some wine switched the dial to "On."

With my old blender, this would have been fine (see earlier point about... adequate), but because the MiracleBLend can actually crush ice, the results were not quite as expected. Yes, I drank it anyway.

For the next trial, I decided to do something radical and, you know, actually read the enclosed instruction booklet that came complete with recipes. Green Smoothies for me? Strawberry "milkshakes" for the kids? Crushed tomatoes for pasta sauce, made fresh from our little urban garden? All of it has been a breeze! It has been a month of near-daily use and we're totally in love.

We thought the rotary knob would make things more complicated, but it doesn't at all. TBH, we mostly use the dedicated smoothie button. It has been providing us with tasty treats all summer, and with the built-in safe operation features, we're happy to let the kids get involved in the fun.

Next up: Watermelon popsicles!

The Eufy MiracleBlend has an MSRP  of $119.99 (USD) and it is available for purchase on Amazon.com.


Disclosure: This is not a sponsored post. I received a Eufy MiracleBlend from Anker Innovations for testing purposes to write this review; no incentive, direction or additional compensation has been received. All opinions expressed are my own.

Email ThisBlogThis!Share to TwitterShare to FacebookShare to Pinterest
Labels: Review

The Things We do for Love 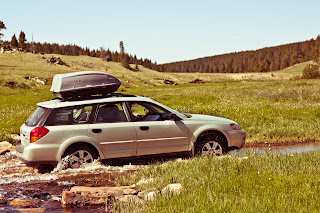 I am not, shall we say, the outdoorsy kind. In fact, my idea of "camping" is a hotel with less than four stars. And yet, when the annual mother-daughter camping trip comes up with the Brownies, I don't have the heart to say no to M. And so we pack up the car and head to the forest where we encroach on nature and piss off a lot of bugs and woodland creatures with our loud children and insect repellent.

We return home two days later, filthy and exhausted and furiously clawing at a fresh collection of bug bites. As I unload the car and haul the bug spray soaked laundry off to the basement, I debate whether or not to it would be easier to just burn the stuff. So far I have thought better of it, but I make no promise for the future.

Invariably, I vow never to return as I wait impatiently after loading the car to just GTFO of there and make a triumphant return to civilization. And then I flick through the pictures and see the joy on her smiling face as she roasts marshmallows and climbs rock walls and learns to interact in the social pecking order of her peers.

Win a Chance to Visit @TorontoCastle to Live the #KnightLife


UPDATE: Thanks to all entrants! The contest is now closed, and the lucky winner has been notified.

The last time The Husband and I went to see Medieval Times, we were a newly dating couple. I won't go into specifics, but it was a really long time ago. After all, the show has enjoyed a successful run in Toronto since 1993. We had been meaning to take the kids but never seemed to get around to booking our tickets. That's why we were thrilled to be asked to come see the show again though this time it was with a toddler instead of tequila. We went to the 4:30 performance on Sunday, March 13, 2016. As this weekend was the official start to March Break it was a full house, even for the early seating.

Medieval Times really is a show for all ages, and watching our kids watch the show was absolutely part of the fun. Perhaps the best part is how hard the crew works to make sure the littlest guests are included in the action at every opportunity. M was awarded the "Queen of the Tournament" banner from the Red Knight, our champion in the Tournament.

The show is entertaining, the cast and crew work really hard to make sure everyone is comfortable and entertained, and the service is quick and efficient. The animals are clearly well trained and well treated, and the falcon display is truly something you don't see every day. But it's obviously secondary to the main event, watching the knights battle it out in the arena before the King and his loyal subjects.

The pacing of the meal service is expertly done to keep you munching and drinking while watching the show. Yes, you do eat with your hands, but they bring plenty of cleaning cloths so you're able to clean up at will. Just go with it. The kids certainly loved having a meal where I wasn't working on encouraging proper utensil technique.

A high chair was provided upon request, which meant even our littlest knight-in-training could see all the action. Towards the end of the show, Little Cat Z was restless, but I think that was more a function of a shorter-than-usual nap than a lack of interest in the show. Though, at not-quite-three, he's about the youngest age that I'd consider taking to the show. After all, it's fun to be able to see it for yourself and that's hard to do when you're wrangling a little person.

I have partnered with Medieval Times Toronto to send one lucky family back to the dark ages! The winner will receive four tickets (two adults, two children) to a Toronto performance between now and the end of April 2016.

Disclosure: My family received King's Royalty Package for the dinner & show to write this review. No other compensation was received, all opinions expressed are my own.