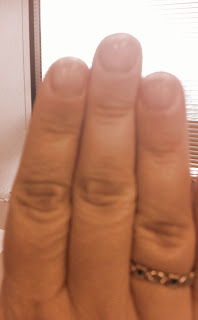 I knew before becoming a parent that I was going to endure snot, vomit, pee and copious amounts of poop when dealing with a small child. I also expected there would be blood from time to time and maybe even a little pus, which we had when The Parasite developed an abscess on her thumb from nail biting. On the plus side, to get her to stop biting her nails and use the terrible tasting nail polish, I had to agree to do it with her. I no longer have bloody stumps at the end of my fingers. Look!

I did not, however, anticipate the notice that went up at daycare last week about the possibility that The Parasite might bring home a few parasites of her own. An outbreak of fucking head lice. I get the heebie-jeebies just thinking about it. The psychosomatic effects kicked in almost immediately as I used my shiny new nails to claw at my head with the same ferocity a bear uses on its prey. My own encounters with this revolting nuisance were back in grade school. I remember the school nurse checking heads and the shame of the kids that were sent home when live critters were found. I was never one of the disgraced.

As with most things really gross, I was more inclined to approach the problem with a firebomb than a match. I watched a few online tutorials to learn how to check her for critters, decided that frequent shudders of disgust would probably do more harm than good, and called in The Lice Squad for Mom & Baby head checks. The next day, a very nice lady came to our house and gave us a clean bill of... head. The "all in my head" scratching has stopped, but occasional shudders of disgust linger on.
at 9:48 PM

When our kids were young, they brought home a parasite called, "Pin worms." I bet they're as much fun as lice.

Gah! Totally agree - did NOT sign up for lice. I overwash everything at the best of times - if we ever get lice no one in the house will have skin and all the linens will fall apart from boiling.