Beauty and the Beast

Ever been part of selecting the creative for an ad campaign? It's a laborious process where you go through literally hundreds of shots to pick the one that's just perfect. The one that embodies everything about your product/establishment/brand. Picture is worth a thousand words and all that. Which is why I am puzzled, nay, mystified, by the choice made here... 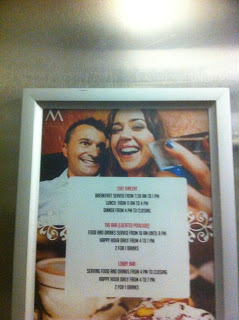 Let's ignore the fact that her nails match her drink, and they're both a kind of radioactive blue. That's nowhere close to the most horrifying thing going on here. That girl looks seriously "Where the hell are her friends?" drunk, and she's having way too good a time for the bar she's at (the one on the hotel we stayed at in Miami), because there was not a soul in that bar for the duration of our stay. But check out the guy she's with. Look at that leer! Is that not the creepiest look you have ever seen? It's saying a lot. Like "That's it... DRINK my precious... the precious will me MINE. All MINE." Is he contemplating a nibble at her earlobe, or her chilled brains in a cup?

I get the willies just looking at this picture. If this was the one that proved to be the best of the bunch, can you imagine what was rejected? Did he stick his tongue out, only to reveal he actually does have the lingua of a lizard?
at 10:32 PM

LOL thsi is hysterical - you couldn't be more right!! xx

this was RIGHT ON! this guy is YUK