He's in there... somewhere. I think. Behind the Easter Egg? Or maybe he was in another tank. You know, after a while they all kind of look alike. But let me tell you, to a three year old, the sight of seal (sea lion?) swimming around a pool with a ball on his nose is officially The Funniest Thing Ever.  If you're in the Upstate New York/Southern Ontario area, the Aquarium of Niagara is just the right size for little people and a great time can be had by all. If you happen to be suffering from a devastating hangover because you and your partner dipped rather heavily into the wine the night before your kid decided 5:30 was a great time to start the day, you can be in and out of there well before the decibel level of hoards of children makes your eyes bleed. Feel free to file that one under "Good to Know" and you're welcome.

Also, since the souvenirs aren't the "officially licensed" ones, you can get a clown fish that a little kid will swear is Nemo for $15. I don't know if that's a good deal or not, but I do know it got us the hell out of the gift shop before I completely lost my shit, so I consider it money well spent. 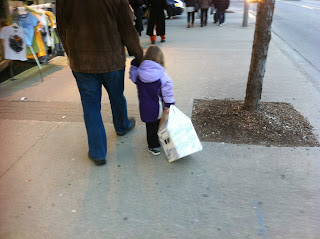 Apparently a single visit to Niagara Falls can make a trip to Build a Bear a "thing." The Parasite picked the bear's name herself, and we have the birth certificate reading "Teddy Bear Queen Falling Bear" to prove it. I know, letting it become a "thing" was a newbie mistake, but watching her try to carry the box back to the hotel herself was worth its weight in gold.
at 10:04 PM

I just have one thing to ask.

And what tribe would she be from? Bearokee or Bearinole?

Okay that is two questions, my apologies I didn't learn to count like normal people.

Teddy Bear Queen Falling Bear had a variety of costume options available, for the bargain price of $tupid each. I convinced The Parasite that her bear (since renamed Princess Teddy Bear - what a demotion!) is more of a t-shirt and jeans kind of bear. Thereby saving myself a small fortune. No word the Band's opinion of this fashion statement, or the circumstances surrounding her fall from grace.