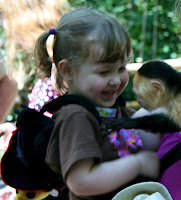 See that kid? I know, she's adorable. She's also a bolter. What's a bolter, you ask? Kids that can be at your side peacefully for great lengths of time until "Oh look, something shiny!" and *poof* they're gone. It's terribly inconvenient in a crowd.

See that thing the monkey is trying to get to on her back? It's her ladybug, a.k.a. backpack leash. She loves it because it means she has a freedom to roam the world she doesn't have in a stroller. When your kid is big enough to walk on her own but hasn't yet mastered the fine art of impulse control, I think it's a damn sight better to use a backpack leash than have her, ohidontknow, run headlong into traffic. Many are of the opinion that using a backpack leash is the epitome of lazy parenting. Well, I readily admit to laziness, so THERE! :P

She's gotten a lot better at walking while holding hands, but there's still the problem of "Oh look, something shiny!" And if you don't know she's bending over to look at an ant or something and let go fast enough, she loses her footing and you end up half dragging her for a second. Man, if you thought people judged you harshly for using a backpack leash, you should see the stink eye you get for half dragging your kid across the sidewalk. I feel like a wrist strap with a little give would make this a lot easier until she's old enough to walk on her own. The following conversation took place when I shared this brilliant, multimillion dollar business idea with The Husband:

Me: You know what would be cool? A thing that attached to my wrist and hers but had a little give for when one of us gets distracted.
The Husband: You mean like handcuffs?
Me: No, I don't want to handcuff my kid. I'm thinking like a velcro wrist strap on either end and a cutesy pink string in the middle.
The Husband: So like girly, ineffectual handcuffs?
Me: You know what? You really are an asshole.
at 9:04 PM

LOL to your convo with hubs.
Im afraid the wrist-to-wrist leash idea has already been taken though... I think it was the original kid-leash, I know I remember them in the 80s :)

Hahaha! That's hilarious! Pink handcuffing our kids!!
It might be a brilliant idea though, most kids like the rough stuff (or is it just my niece?)
And I put a leash on my baby daughter too but shh! the world might handcuff us if they hear :)

Never seen a back pack leash before, but I have tried the other kind and my kid took it off herself and took off running. Geez. So much for that. LOL

He is an asshole for calling a clearly safety conscious item some sort of sexual criminal device.