Dork Mom to the Rescue!

The Parasite has taken to putting her toys on the potty and putting them to bed before announcing to us that it's bath time for her, which is the first step in her bedtime routine. You read that right, my toddler tells me she wants to go to bed. Yes, she IS the best kid in the world, and she's all mine - even if I do call her a parasite. She's a stickler for authenticity. That means when she puts her Little People dolls to bed, she needs to cover them with a blanket. It's cute as hell, really. But I made the mistake of giving her a Kleenex to use as a blanket ONCE and have regretted it ever since. As she went and grabbed her TENTH piece of Kleenex for "b'anket for dowwy", I knew I had to do something. But what?

I'm glad you asked. Did you know I knit? I made at least a dozen attempts to quit smoking, and in each one I learned something new. The final final piece of the puzzle was figuring out what the hell to do with my hands, and that's where knitting came in. That was over five years ago, so clearly it's a winning strategy. Happy knitter that I am, I went upstairs, grabbed some leftover yarn from a long-finished project, some U.S. size 11 needles and cast on 14 stitches: 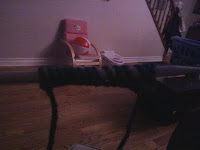 Yes, that's a skinny yarn on some big needles. But it's a doll's blanket, it doesn't have to be wind-resistant. I figured I'd just knit for a while and then decide I was done, probably when it looked relatively square: 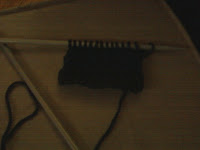 As soon as The Husband guessed what I was making out loud, The Parasite decided I was done then and there. "I need a b'anket for dowwy, Mommy! It's bedtime for her." So here it is, the saviour of my annual Kleenex budget and the thing that made me a hero in the eyes of a two year old: 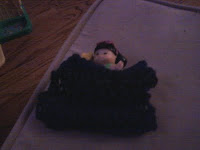 Now I just have to make a few more for ALL the dollies (and who the fuck bought her all those Little People anyway?) and I'll be on track to save the planet from my Kleenex-happy kid. I just hope she doesn't get any big ideas about knitting requests. There's an update on the fertility doctor front too, but I have knitting to finish and I'm way too tired so I'll fill you in on that later.
at 10:04 PM